You’re an engineer at a startup and it is LAUNCH DAY. Your job: discover and fix mysterious bugs in a complex software system.

A one-page game about programmer 'possums based on Grant Howitt's Honey Heist.

In order to download this game you must purchase it at or above the minimum price of $1 USD. You will get access to the following files:

Somehow every game built off the Honey Heist engine not only captures the same magic but pushes this weird microgenre further, and I am absolutely thrilled to be able to recommend Bug Bounty to people.

It's niche and there is no shortage of engineering jokes, but it's also flavorful and funny and the random roll charts produce some *fine-tuned* nonsense.

I think Bug Bounty probably benefits heavily from a GM that's at least a little familiar with engineering, since most of what's in the game revolves around engineering rather than possums, and you lose way harder if your possum stat goes too high than if your programmer stat maxes out, but it's very easy to run otherwise, and there's flashback mechanics to shift points between stats to give players a bit more control over their fate.

Overall, if you like engineering, absurdity, and quick-to-run mildly crunchy games, grab this.

I love this thank you 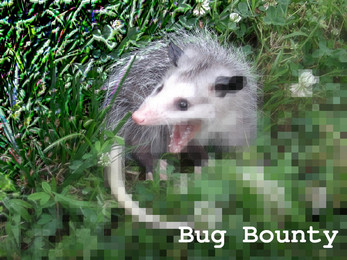